A Toast to great partnerships

Here at Unilever we believe in the power of partnerships, and understand the vital need to work together to achieve positive change in society. We are committed to reducing waste, with a bold ambition to develop packaging that is fully reusable, recyclable or compostable by 2025, and we are working hard with our partners to ensure meet that target. But we also love to hear about the inspiring partnerships other organisations are creating to make sustainable change happen, which is why we are so excited to introduce Toast Ale, an organisation which embraces the circular economy, using left-over bread to make beer, and making lots of friends along the way. Chief Toaster Rob Wilson tells us more. 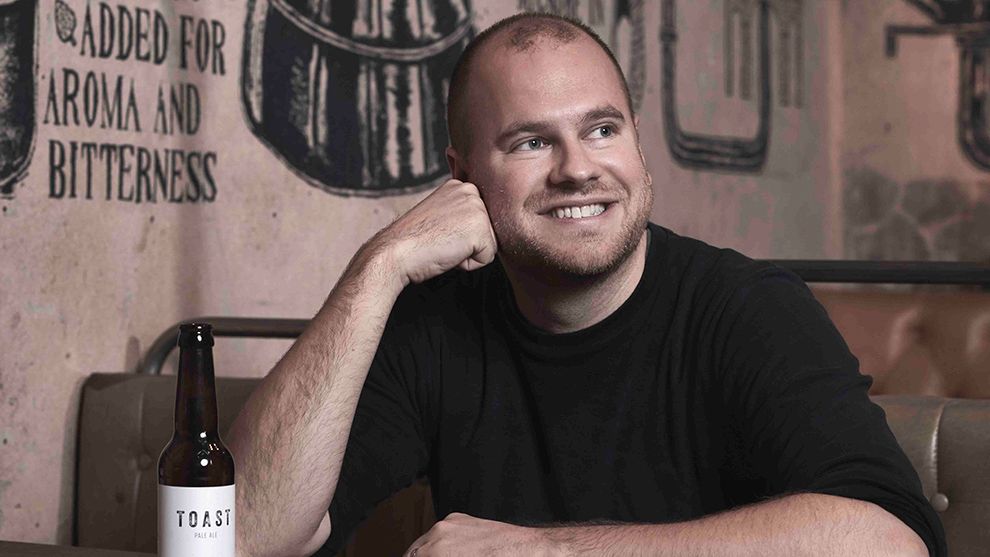 Rob has founded a number of social change organisations and led Ashoka in supporting social entrepreneurs to scale their system-changing enterprises. Rob has been advising Toast since its inception in late 2015 and is now leading the business as CEO.

If you want to change the world you must throw a better party than the people who are destroying it.

Do you know what makes a great party? When you give everyone the recipe to make beer from bread!

At Toast Ale we brew award-winning beer using unsold loaves from bakeries and unused crusts from sandwich makers. There’s a fresh slice of surplus fresh bread in every bottle and all the profits go to the charity Feedback to fight food waste. That’s why we say that Toast is the best thing since… well, you know.

We began our journey in January 2016, founded by leading social entrepreneur Tristram Stuart. Tristram is an expert on the environmental and social impacts of food waste, and bread is one of the most prolific food waste offenders. 44% of the bread produced in the UK is thrown away along the supply chain, and 24 million slices of bread are thrown away by UK households each year.

Clearly there’s a real job to be done here, especially if we are going to achieve the Responsible Consumption Sustainable Development Goal, which includes among its objectives the aim to “halve per capita global food waste at the retail and consumer level, and reduce food losses along production and supply chains by 2030”. Organisations like ours have a big role to play but we can’t do it on our own, and we rely on our partners coming together and acting collectively.

So what does that mean in practice? Well, we source much of the bread we use from commercial sandwich makers such as Adelie Foods. The heel ends of loaves are never used when making sandwiches and they will often need to pay to dispose of the waste. Instead, we offer a zero-cost outlet that is win–win for both sides. We’ll take the fresh surplus bread off their hands and brew it into a great new product.

So that’s the input, but why not make the output collective too? That’s why we got excited about an idea for collaborative brewing. Instead of direct investment into our brewery, we saw an opportunity to get everyone involved in making a delicious beer. So we reach out to existing, established brewers, leveraging their expertise and excess capacity to create truly delicious beer.

Collaboration brewing has also become a central part of our ethos and strategy to create exciting beers with local bread at a community level. Interestingly, we find that it really sparks imagination and excitement from our corporate partners. In August 2016, Wiper and True Brewers in Bristol created ‘Bread Pudding’.

Inspired by the idea that traditional bread pudding uses leftover bread, they brewed bread with brandy-soaked currants infused with Bourbon vanilla and cinnamon along with lactose – the sugar from cow’s milk – to create a rich, sweet and velvety Amber Ale evocative of a traditional bread pudding. They found it motivated and inspired their teams and all the profit came back to Toast to help us in our mission of eliminating food waste.

We have also used celebrity partners to help us generate interest. In fact, Toast Ale launched with support and endorsement from chef and restaurateur Jamie Oliver.

And our party is attracting the crowds. Launching only a year ago, we now sell UK-wide and have begun an exciting drive to take our beer to a global audience. We’re already brewing Toast in New York, Cape Town and Iceland.

But if we really want to eliminate bread waste, we need to have everyone as a partner. That’s why we have open sourced our recipe so home brewers can brew with bread themselves. We have a huge mission on our hands and we don’t have time to waste.

Please don’t hesitate to reach out for further information: hello@toastale.com