Invented to combat cholera, today Lifebuoy is spearheading our efforts to bring health and wellbeing to 1 billion people. Global Handwashing Day on 15 October highlights the life-changing impact the humble bar of soap can make.

In 1894, Unilever’s co-founder William Lever started selling soap. His purpose was a simple one. It wasn’t to get rich. It was this: to help make cleanliness commonplace and bring hygiene, and thereby health, to the masses.

That central goal remains the same today, says Kartik Chandrasekhar, Lifebuoy’s Global Brand Vice President. “We genuinely come to work wanting to help people. For us, it’s this guiding purpose that motivates us."

The importance of soap as a tool for public health cannot be underestimated. Around the world diarrhoea and pneumonia – the two most common diseases transmitted by unclean hands – still kill an estimated 1.4 million children every year.

The simple act of washing your hands with a high-quality soap after going to the toilet brings down the risk of such diseases inordinately.

Today, Lifebuoy is the world’s No.1 selling anti-bacterial soap. After 10–12 seconds of handwashing, it will kill 99.9% of all germs – marking it out from all its competitors.

Lifebuoy’s guiding passion is to make hygiene as affordable and as accessible as possible. Those who need hygiene the most are the poor. Hitting a price point that works for them, without compromising quality, takes enormous innovation.

Crack this and the financial rewards, as well as the social benefits, are potentially huge. Marketing a product that anyone can buy, whatever their income, makes everyone a potential customer.

Lifebuoy’s commitment to affordability is also helping the brand towards its vision of changing the hygiene behaviour of 1 billion people – a target it is well on track to achieve.

Pivotal to Lifebuoy’s social mission is education. However effective the chemistry may be in a bar of Lifebuoy soap, it won’t neutralise any germs if it’s not used. To have maximum effect, handwashing has to be done habitually – before meals and at other key moments during the day.

So for well over a decade now, Lifebuoy has been running grassroots programmes to promote regular, habitual handwashing with soap. Working with multiple partner organisations on the ground, Lifebuoy focuses its outreach efforts primarily on school children and new mothers.

Clinical trials have shown that a 21-day programme can lead to a 25% reduction in diarrhoea. Furthermore, the fewer days that pupils lose through avoidable illness, the better their academic results.

To spread the handwashing message even further, Lifebuoy recently incorporated its handwashing activities into a multi-media campaign called ‘Help a Child Reach 5’. The campaign’s most recent video clip, Chamki, has been viewed over 15 million times on YouTube and has won over 35 industry awards. 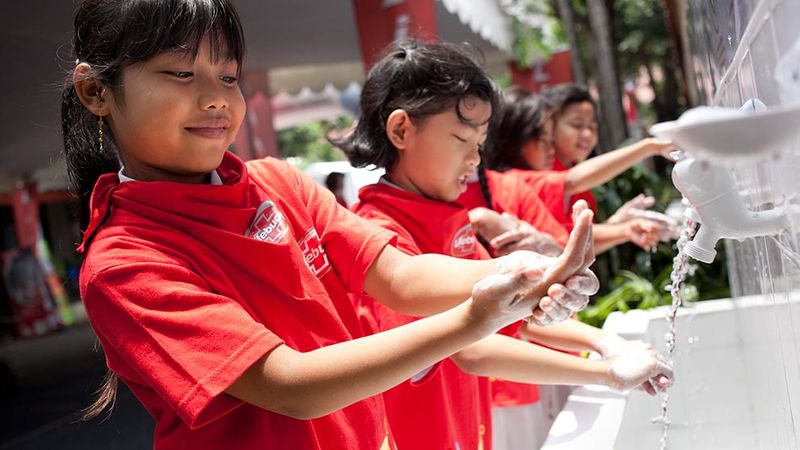 Lifebuoy’s reach is wide, but it can’t rid the world of bacterial infections alone. In addition to its own charity and cross-sector partnerships, therefore, the brand plugs into other existing initiatives.

So in India, for instance, Lifebuoy recently participated in ‘Swachh Aadat, Swachh Bharat’, the government’s nationwide hygiene mission. As part of its support, Lifebuoy ran a series of creative handwashing initiatives in the slums of Delhi and Mumbai, as well as in rural areas around its soap factories.

Other times, it means starting something new – sometimes with an unexpected partner. Lifebuoy recently kicked off a partnership with Gavi, the Vaccine Alliance. The tie-up sees the two organisations promote handwashing and vaccination simultaneously.

At times, Lifebuoy may also turn to a celebrity ‘champion’ to help raise awareness of handwashing. Among its list of high-profile supporters is Indian Bollywood star Kajol Devgan, who took Lifebuoy’s handwashing message all the way to the United Nations General Assembly.

The product developments that Kartik and his Lifebuoy colleagues are leading today would be unrecognisable to William Lever. But the brand’s purpose: that he would identify immediately. Why? Because it hasn’t changed a bit.

Visit www.lifebuoy.com to find out more about the brand and its social mission.