London/Rotterdam - Unilever today announced a new annual global sales target of €1 billion from plant-based meat and dairy alternatives, within the next five to seven years. The growth will be driven by the roll-out of The Vegetarian Butcher as well as increasing vegan alternatives from brands including Hellmann’s, Magnum and Wall’s. 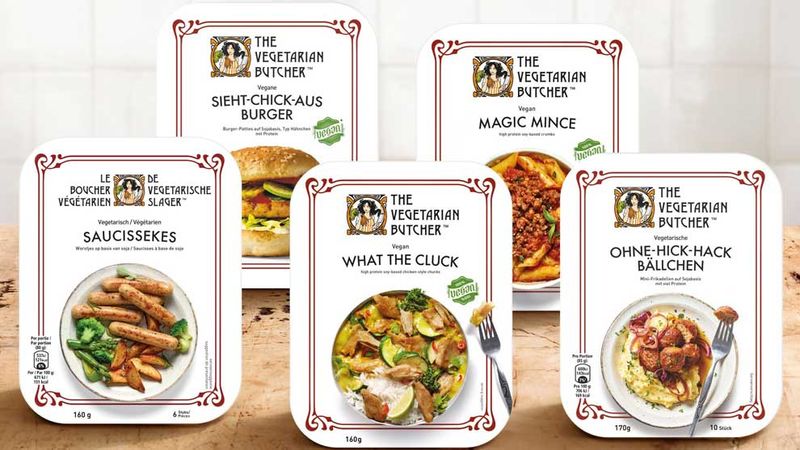 The target is part of Unilever’s ‘Future Foods’ ambition, launched globally today with two key objectives: to help people transition towards healthier diets and to help reduce the environmental impact of the global food chain.

Unilever, which also makes Lipton, Ben & Jerry’s and Knorr, has also committed to:

Hanneke Faber, President of Unilever’s Foods & Refreshment Division, says, “As one of the world’s largest food companies, we have a critical role to play in helping to transform the global food system. It’s not up to us to decide for people what they want to eat, but it is up to us to make healthier and plant-based options accessible to all. These are bold, stretching targets which demonstrate our commitment to being a force for good.

“It is widely recognised that the current global food system is inequitable and inefficient. One billion people around the world are hungry2 while two billion are obese or overweight3. One third of all food produced is thrown away4. And animal agriculture is the second largest contributor to greenhouse gas emissions after fossil fuels and a leading cause of deforestation, water and air pollution and biodiversity loss5.”

The 2019 EAT-Lancet report showed that a diet rich in plant-based foods and with less animal-sourced foods offer both health and environmental benefits6.

Jessica Fanzo, Bloomberg Distinguished Associate Professor of Global Food & Agricultural Policy and Ethics, Johns Hopkins University and a co-author of the EAT-Lancet report said: "The average person’s daily diet will need to change drastically during the next three decades to make sure everyone is fed without depleting the planet. By improving food production and food environments, transforming eating habits, and reducing food waste, we can begin to solve these problems. Unilever’s commitments are integral to helping people make changes to their diet, with healthier and more sustainable food products that are accessible and affordable for their consumers.”

Liz Goodwin, Senior Fellow and Director, Food Loss And Waste at World Resources Institute said: “Food loss and waste have massive impacts in terms of cost to the global economy, the environment and society. We know that food loss and waste contributes about 8% of global greenhouse emissions7 as well as wasting the land and water used in production of food. We need as many companies as possible to step up and prioritise the issue of food loss and waste and take action to reduce it. It is great to see Unilever showing this sort of leadership. Given the size and reach of Unilever, their commitment to halve food loss and waste across their global operations will undoubtedly lead others to take action as well.”

Unilever has been expanding its plant-based meat and dairy alternatives business for several years. After acquiring The Vegetarian Butcher in 2018, Unilever has expanded the plant-based meat brand into more than 30 countries and was last year chosen as the supplier of Burger King’s Plant-Based Whopper and Plant-Based Nuggets across Europe, the Middle East and Africa.

In Ice Cream, its first vegan Magnum was awarded Best Vegan Ice Cream in the UK by PETA in 2019. Both Hellmann’s Vegan Mayo and Ben & Jerry’s Coconutterly Caramel’d Dairy-free were named as one of Nielsen’s top 25 Breakthrough Innovations in Europe for 2020.

In 2019, Unilever made an €85million investment in ‘The Hive’, a foods innovation centre at Wageningen University in the Netherlands to support research into plant-based ingredients and meat alternatives, efficient crops, sustainable food packaging and nutritious food.

The Foods & Refreshment Division’s targets also support Unilever’s global commitments to achieve a deforestation-free supply chain by 2023; invest €1 billion in a new Climate & Nature Fund; and achieve net-zero emissions for all products by 2039. The company has also pledged to ensure 100% of its plastic packaging is reusable, recyclable, or compostable by 2025.

The global plant-based meat market is growing at a compound annual growth rate (CAGR) of 15.8 per cent8, set to reach $35.4 billion by 2027. Barclays estimated in 2019 that the wider plant-based market could grow by over 1,000% over the next ten years, reaching $140 billion by 2029. The research also found that 92% of plant-based meals in the UK are consumed by the 22 million non-vegan “flexitarians” in the market9.

2020 research by ethical investor network FAIRR highlighted that two in five global food giants now have dedicated teams to develop and sell plant-based alternatives to meat and dairy. Unilever is one of only two companies to be cited as a ‘pioneer’ in this year’s FAIRR ranking of the world’s top 25 food retailer and manufacturers that are shifting to more sustainable protein sources10.

The recent announcement of Unilever’s partnership with microalgae expert Algenuity marks an important step in making this critical shift toward the development of sustainable food alternatives. Despite being packed full of protein, antioxidants, vitamins and minerals, microalgae have never really made it into the mainstream, principally because of their strong green colour and bitter taste and smell.

To overcome this, Algenuity has developed an innovative technology named Chlorella Colours® which removes the unpalatable taste, without reducing any of the microalgae’s valuable nutritional content. Their emulsifying and enriching properties are similar to those of traditional ingredients such as eggs, which means they can be used in a wealth of foods including mayonnaise, soups, sauces, meat alternatives, baked goods and pasta. This also, of course, makes microalgae particularly relevant for Unilever brands like Hellmann’s, Knorr and the Vegetarian Butcher.

WHO recommends that adults consume less than 5 g (just under a teaspoon) of salt per day.