When the flavours of Pot Noodle’s ‘Lost the Pot’ new block format didn’t hit the mark with consumers, the marketing team decided not just to be honest about their flavour shortfall but to relaunch with a campaign that made the blunt feedback they received part of the messaging.

Honesty is the best policy, so the saying goes, but what if that honesty extends to creating a marketing strapline on a brand extension of one of your bestselling snack products that tells consumers it’s ‘No Longer Crap?’

A high-risk strategy for sure, but this ‘front and centre’ marketing style is not unusual for our UK snack brand, Pot Noodle.

As a speedy-to-make, store-cupboard favourite of students, its marketing tone of voice matches that of its audience who are as frank and ‘in your face’ with their feedback as you’d expect Gen Z to be.

A brand extension that ‘Lost the Pot’

“Nielsen data shows that block noodles are growing rapidly in the Instant Hot Snack category, at 28% vs the Pot format at 9%. And their percentage of the market looks set to only get bigger,” says Angus Giddins, the snack’s brand manager.

The uptick is not just down to demand from the brand’s 16–24-year-old core customer base, it also includes increasing numbers of people working from home who are looking for fast lunches and households seeking tasty, cheap and filling dinner options for their family.

“Pot Noodle consumers want a tasty, quick and easy snack or meal solution,” explains Angus. “As the biggest player in the Instant Hot Snack category, Pot Noodle wanted to serve our consumers in this space.”

A subtle approach receives not so subtle feedback

A key USP of the Pot Noodle brand is flavour, but when the team launched its ‘Lost the Pot’ block noodle packs during the Covid pandemic in 2020, the pack flavours were more subtle than their in-pot counterparts.

“From existing usage data, we had anticipated people would ‘add things’ to their noodles to create a dish, as this is how consumers had been using competitor products,” explains Nutrition Local Jewels Marketing Manager, Lena Portchmouth. “So we launched our blocks with a more subtle base flavour but, in reality, when consumers saw the brand name ‘Pot Noodle’ they expected full-on flavour and didn’t respond well.”

Customer reviews were poor and their comments were blunt. One simply wrote “Yuck”.

In July 2021, the team decided to go back the drawing board. They relaunched in July this year, a few weeks before students start returning to campus for the beginning of term.

The new ‘Lost the Pot’ packs have a renewed promise on flavour and campaigns are running on social channels that don’t just acknowledge poor customer feedback – but make it part of the messaging.

One Twitter post includes a framed customer review alongside a request to the Museum of Failure to consider their ‘Lost the Pot V.1 flavours’ as a new addition to the Museum.

Why the blunt messaging?

“It’s the truth,” says Angus. “We were gutted that we got it wrong first time. We know honesty is well received by our consumers and putting a consumer mindset on, it is refreshing when brands are honest. I guess we were nervous to an extent, but honesty is always the best policy.

“Plus, we knew our product was great: 95% of consumers preferred our new chicken block noodles vs our old version. And that’s not all. We did competitor testing with Ipsos Mori, and our new chicken was preferred vs the No.1 seller in the block sub-category in a blind taste test.”

The flavour turnaround has seen the team receive five-star reviews on Tesco and Asda sites. The sauciness of the strapline has led to the campaign being featured in Ad Week and fellow marketers taking to LinkedIn to debate its humour and honesty. 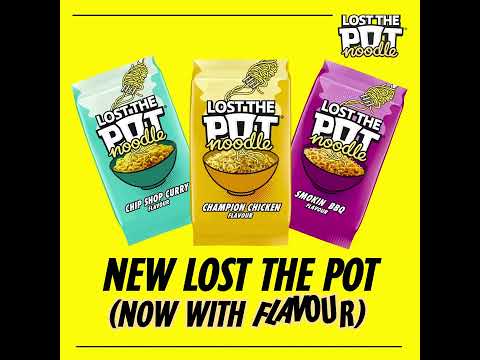 The campaign still has two more months to run, but in its first few weeks it has reached 6.3 million unique users and 16.1 million impressions.

“We didn’t just listen to consumer feedback, we did something about it. And the good news is that’s not just showing up as eyeballs on social,” says Angus. “Recent figures from Nielsen are showing an average boost to sales of 20% with these new packs.”

Our Chief Digital and Commercial Officer Conny Braams shares her views on how we must unite to ensure the next iteration of the internet is a safer place for people to shop, stream, work and play.

Fulfilling a craving for ice cream used to require being in-store or near an ice cream van. Unilever’s Ice Cream Now (ICNOW) teams are working to change that. Whether you’re online, in transit, in a virtual world or exploring earth’s atmosphere, they’ll find a way to deliver.