Unilever’s ice cream factory in TaiCang, China the first of its kind to be recognised as an ‘Advanced 4th Industrial Revolution Lighthouse’ by the World Economic Forum today. 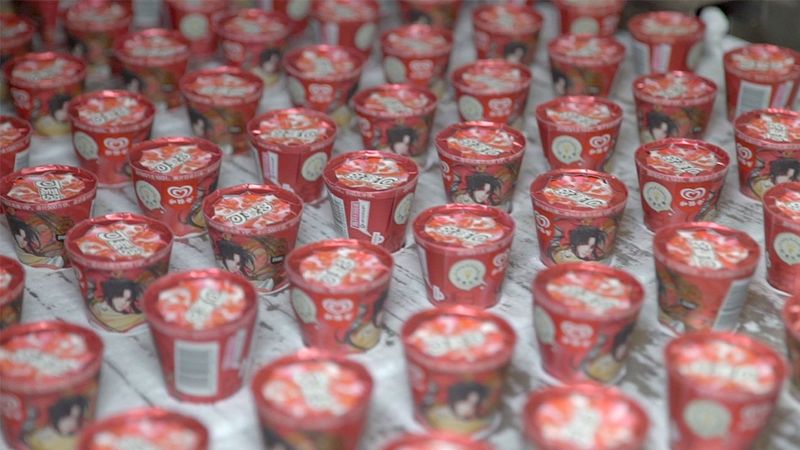 The site at TaiCang has been operating since 1996 and now produces two million ice creams a day, for brands such as Magnum, Cornetto and Wall’s. This is the equivalent to 60 million litres of ice cream each year. The factory’s adoption of revolutionary technologies, such as digital smart machines and AI, has resulted in increased speed and agility and paved the way for Lighthouse status.

The technology used in TaiCang has enabled the factory team to become more agile and efficient, keeping up with fast-paced consumer demand following the unprecedented boom in e-commerce. Average changeover time of a production line (switching from Magnum vanilla to chocolate, for example) has been reduced from eight hours to just nine minutes. In addition, new Unilever research shows that through smart automation, the Cornetto wafer cone is four times crispier than other available products.

Digital platforms gain the latest insights from consumers through e-commerce and social media channels, and One-click AI Sales Forecasting is able to accurately predict demand. Being able to combine consumer insights with a digital R&D platform has also drastically shortened the innovation lead time, from 12 months to three, giving consumers what they want faster. The factory’s digital transformation has also accelerated sustainability efforts. Carbon emissions have been reduced by 83%, with electricity and water consumption being reduced by 14%. The site is on track to be carbon neutral within the next two years, directly contributing to Unilever’s target to have zero emissions from its global operations by 2030.

Jennifer Han, Unilever’s Head of Supply Chain Foods & Refreshment said: “We’re thrilled to have TaiCang part of the prestigious Lighthouse Network. By digitally transforming our value chains, we have been able to match the fast demands of the consumer and continue to produce our iconic and much-loved ice cream brands at scale. In addition, innovative technologies have allowed our factory workers to harness new, digital skills.”

Marc Engel, Unilever’s Chief Supply Chain Officer, said: “Unilever is on a journey to digitise its supply chain. The TaiCang site’s adoption of new technologies has expanded the factory’s efficiency and agility. It has seen a 42% reduction in manufacturing costs, while increasing ice cream market share in China The TaiCang site showcases a new type of smart manufacturing; one that combines productivity and competitiveness with environmental efforts. We see this as the future of manufacturing.”

The first Unilever factory to be awarded WEF’s Lighthouse status was its manufacturing site in Dubai, and its site in Hefei, China was the second.